Negative and/or white space is an essential part of all good design. But if used strategically, negative space can be a clever way to add a deeper or dual meaning to your designs, especially for logos and brand presentation projects. Or it can simply contribute to a more minimalist look to your layout.

“Negative space is the remainder, those “empty” spaces or gaps left between the main subject, the positive space, and the edge of the image. It is a space without important information for the photograph, because if it does, if it adds information, it would become a positive space.”

What Is Negative Space?

When we look at a photograph, in general terms we are looking at three distinct elements:

Negative space, even if it does not have “relevant information”, is also an element of the composition and, therefore, we must know how to use it to give more interest and beauty to our images.

How is Negative Space?

It must, therefore, lack attention-grabbing details. It should go unnoticed. However, and this is the second characteristic of negative space, it must have a presence. We have just said that the viewer should not feel called to look at the negative space, but if it is well used in the image, the negative space will always be present, contributing meanings and nuances to the image.

As we have said, negative space should have no relevant information but this does not mean that it is empty of meaning. A well-used negative space can convey many things. And how can this be?

It turns out that negative space, despite its poetic name, also has visual weight. Therefore, this means that we must be very conscious of where we place it within the composition because depending on the space it occupies, it will mean one thing or another.

For example: if we place the negative space above the subject, it may appear to “crush” the main element of the image or give it enough space to fly, thus giving the subject some “freedom”. If, on the contrary, it is below, the protagonist of our photo may seem to “float” and, therefore, the negative space will give us a feeling of lightness.

The color of the negative space is also important. As a general rule, a light-colored negative space will bring to our minds images of lightness and peace, while a dark-colored space, will be easier for us to relate it to great weight or distress. But this, if you remember, already happened with high key and low key photographs.

The Relationship Between Negative Space and Subject

One of the ways to give the subject of a photograph undisputed prominence is to use negative space to surround it in the image. This way, it will not have to fight with other elements and, therefore, it will gain prominence. Being clear about this concept can be useful when trying to compose minimalist photographs, in which the fewer elements there are, the better.

Be that as it may, the negative space has two main functions concerning the main subject of our image:

Define the subject. Negative space can help you define the positive space and, therefore, the main subject of your photograph. We have already seen that the negative space has a lot of meaning depending on how it is, if we manage to relate the subject with the right negative space, it will help us to reinforce the “personality” of the first one.

Sometimes, especially if our main subject is not attractive enough, the negative space may steal the limelight from the main element of the image. It may even become (the negative space) the protagonist of the photo. This may be of interest to you on occasion, depending on what you want to express with your image. The important thing is that you are aware of it and know how to avoid it if it happens and it is not what you were looking to achieve with the camera.

Fill the Frame… With Empty Space!

Filling the frame is one of the main rules of composition.

It consists of precisely that: making sure that in the photograph we are taking, there is no corner that does not contain some kind of information. Filling in the framing can help us a lot when it comes to knowing from what angle we should take a picture and, above all, what we should take that picture of.

Sometimes we become obsessed with trying to capture as many elements of a scene as possible and the only thing we achieve is to clutter the composition with superfluous elements and information. In order to follow the rule of filling the frame, we should look for the element that most interests us of all those in front of us and try to fill the frame with it, leaving out of the image those elements that do not provide the information we are interested in.

But, didn’t we say that the empty space also had meaning, that it also provided certain information? Then… wouldn’t it be possible to fill the frame with, paradoxically enough, empty space? In my personal opinion, yes, as long as we are aware of what we are doing and it is not a “free” negative space. If the negative space that we are including in our composition serves us to explain something, it will have its own presence, it will make sense and therefore, it will help us to fill the frame.

In this design for a restaurant called “The Swan & Mallard”, John Randall managed to include in a very creative way a swan, a royal add, and the sign “et” (&) in the logo through the interaction of positive and negative space.

In a different way, the negative space in this logo by Sameer Ahmed conveys movement and context to the word being spoken:

Look closely at the shapes and spaces created by the violin in Sam Hadley’s concert poster. They form a series of numbers -1, 2 and 3 – that are part of the event’s name.

And a couple of more abstract, but equally effective designs. Both work to support a theme in an unexpected way.

The first, by Andrea Minini for PETA (People for the Ethical Treatment of Animals), takes a minute to fully appreciate. At first glance, it’s as if you’re looking at abstract ribbon-like shapes, but then you realize that the negative space formed by those shapes looks like animals.

Now you realize that the slats themselves also look like animals, and the interaction of the positive and negative space creates a series of shapes that blend seamlessly together (from left to right, a bird, a cat, a rabbit, a gorilla, a dog/wolf, and a bear) to create a sort of optical illusion. Did you get a glimpse of all the animals?

The next one, a book cover design by Jason Booher, takes a concept from the title (immersion) and just uses curved lines and negative space to create (abstractly) the image of a person immersed in water or some other substance.

The Critical Importance of Graphic Design in Business

DON’T MISS OUT ON 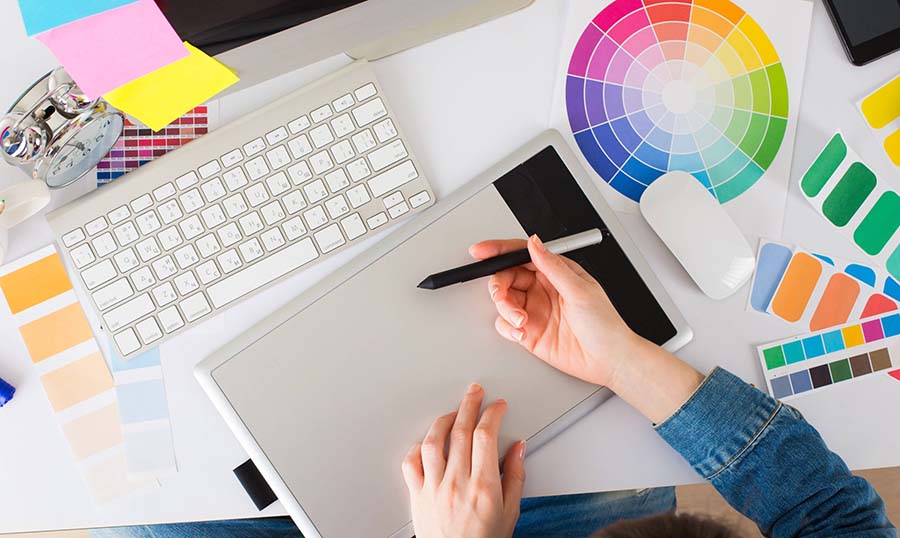 Enter your name and email below to receive updates on upcoming promotions for our variety of services.